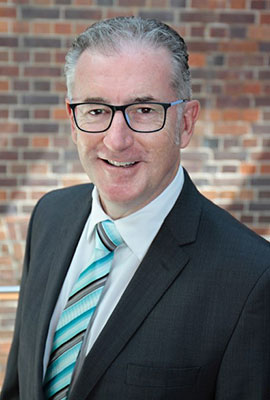 In a career spanning almost 40 years, Nigel has held executive leadership roles in non-profit organisations for all that time, most notably serving as Chief Executive Officer of Mater Foundation (Queensland) for 24 years. Under Nigel’s leadership, Mater Foundation’s annual fundraising revenue grew from $2m to $70m, raising over $750m over that period and establishing the Foundation as one of Australia’s largest health charities and a major funder of medical research and clinical services.

Holding an MBA majoring in fundraising as well as qualifications in Public Relations and Marketing, Nigel is also a Certified Fundraising Executive (CFRE) and a Graduate of the Australian Institute of Company Directors (GAICD). In 2012 he was recognised as the Arthur Venn Australian Fundraising Professional of the Year and has also been recognised through other non-profit management awards.

Nigel is the Founding Partner of Giving Architects Australia, a fundraising campaign and impact investment consultancy, and has played a significant leadership role within Fundraising Institute Australia (FIA) over the past 35 years, serving as Board Chair on two separate occasions. He has also held several international voluntary appointments within the philanthropic and fundraising sector.

Currently a director and Deputy Chair of Act for Kids, Nigel also serves on the Board of the Institute for Sustainable Philanthropy and previously served on the Community Council for Australia and CFRE Boards. He is a Fellow of Fundraising Institute Australia, the Institute of Managers and Leaders, and the CEO Institute. He is also a Past President of the Rotary Club of Albany Creek and has been active in community and sporting organisations for over 40 years.

As one of Australia’s pioneer ‘first career’ fundraising professionals, Nigel has been immersed in the evolution of fundraising as a profession in Australia over the past four decades and continues to be a significant influencer and innovator in the sector, nationally and internationally.